Legendary Gratful Deal guitarist and founder Bob Weir comes to Orpheum Theater – Omaha on Sunday 15th March 2020 for a night of songs from his long and varied career! Weir will be joined by Wolf Bros (aka legendary funk-rock performer Don Was and RatDog/Primus drummer Jay Lane), who he first began performing with in 2019, for a night of “the songs of Grateful Dead and more!” The trio make a great team, bringing a varied and exciting spin to so many of the tunes Weir has played and written over the years, and they make a natural fit and a must-see act for all Weir fans!

“This is more fun than a frog in a glass of milk,” Weir said in a press statement, “Don is all over his upright, and Jay needs to somehow be kept in line at times, but it’s all falling together nicely.” 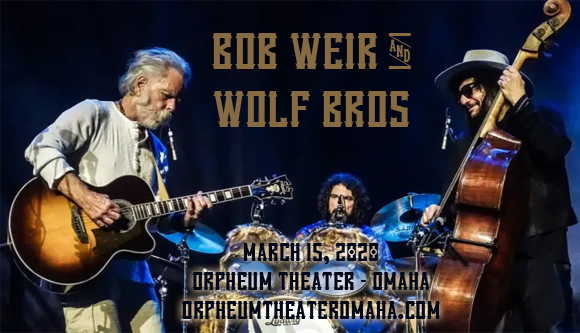 Best known for being one of the founding members of cult American jam band Grateful Dead, Bob Weir is an American musician and songwriter. Whilst a member of Grateful Dead, Weir founded and performed in several side projects, including Kingfish, the Bob Weir Band, Bobby and the Midnites and Scaring the Children. After Grateful Dead disbanded in 1995, Weir concentrated on performing with his band RatDog, and in 2009 he founded the jam band Furthur alongside fellow Grateful Dead band member Phil Lesh. Both RatDog and Furthur went on indefinite hiatus in 2014. Since 2015, Weir has performed alongside former Grateful Dead members Mickey Hart and Bill Kreutzmann, as well as Grammy-winning singer/guitarist John Mayer, in the band Dead & Company. In addition to his work with other band, Weir has released four solo albums over the years. He was inducted into The Rock and Roll Hall of Fame as a member of the Grateful Dead in 1994.