Hugely successful all-female Irish ensemble Celtic Woman is celebrating its 15th year! Mairéad, Éabha, Megan and Tara are headed to Orpheum Theater – Omaha on Tuesday 31st May 2022 as part of their Celebration Tour! Celtic Woman brings a dramatic and engaging stage show that enchants the audience by evoking the magic and rich culture of the Emerald Isle with music, song and dance! The four beatufiul and talented soloists are joined by an array of drummers, pipers, dancers and backing vocalists for this fabulous event! 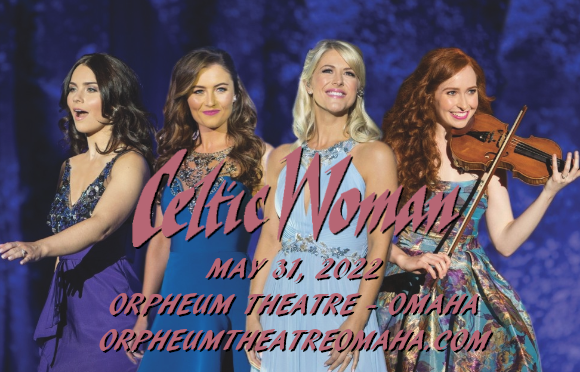 In 2005, Celtic Woman began – an all-female Irish vocal and musical ensemble that was conceived and created by David Kavanagh and Sharon Browne, alongside David Downes (a former musical director of the Irish stage show Riverdance) for a one-off event in Dublin, Ireland that aired on PBS. Its reception was such that the group that performed that night became a band and began to tour together. Since its inception, Celtic Woman's line-up has changed several times, with the current group consisting of vocalists Mairéad Carlin, Éabha McMahon and Megan Walsh, and vocalist, harpist and violinist Tara McNeill. Celtic Woman has released 21 albums over the years, including several live, compilation and Christmas albums. The group has been named Billboard's World Music Artist of the Year six times and each of its 11 studio albums have debuted at number one on Billboard's World Album chart. Celtic Woman's most recent album is 2019's The Magic of Christmas.