Prog metal giants Dream Theater bring their Distance Over Time Tour to Orpheum Theater – Omaha on Monday 4th November 2019! The electrifying musicians will be performing tracks from their brand new album – their first in three years!

“When I listen back to the album, I can distinctly recall every moment of the writing process; where I was standing in the room, what inspired us in that instant and the meaning behind each song. As a producer, my goal was to try and create the best-sounding Dream Theater record we’ve ever made so that listeners can just be enveloped in the music. I really wanted this recording to truly reflect the spirit, joy and passion that went into making the album and for people to walk away feeling some of the organic nature, personality and raw energy that the band captured while together in the studio. For me, I think it accomplishes that and I hope that other people will feel the same way,” explains John Petrucci. 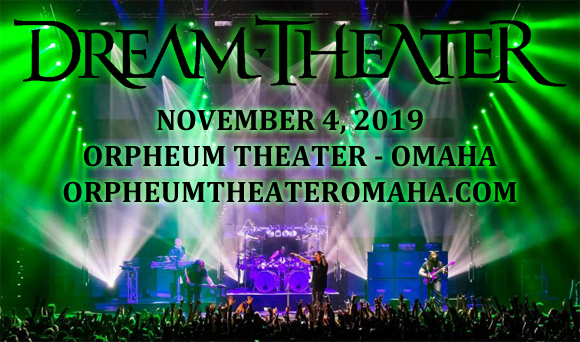 American progressive metal band Dream Theater was formed in 1985 by guitarist John Petrucci, bassist John Myung and drummer Mike Portnoy, originally under the name Majesty. The trio attended Berklee College of Music together and began by playing covers of Rush and Iron Maiden songs together. After adding more musicians to their line-up and changing their band name, they dropped out of Berklee to pursue a music career, and began to write and perform their own songs. Over the years, the band has released 14 studio albums and has sold over 12 million records worldwide. Dream Theater is often noted as one of the originators of the progressive metal genre.