Combining the masterful artistry and skill of a cappella singing with the warm, rich harmonies of country music, Minnesota vocal group Home Free is headed to Orpheum Theater – Omaha on Thursday 19th December 2019! The group, who won the fourth season of NBC's The Sing-Off, are performing as part of their Dive Bar Christmas Tour, and will be singing songs from their recent album Dive Bar Saints, as well as some holiday classics! A festive and magical evening awaits from these talented and charismatic vocalists! 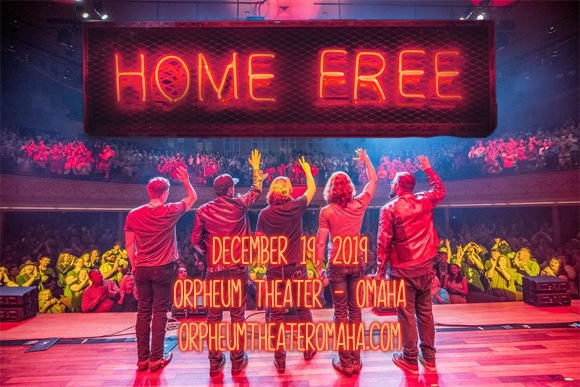 Drawing inspiration from country music, Home Free is an American a capella vocal group that formed in 2000 in Mankato, Minnesota. The group consists of five vocalists: Austin Brown, Rob Lundquist, Adam Rupp, Tim Foust and Adam Chance, and specializes in close vocal harmony. For seven years, the group built up a following locally and nationally, until they began performing professionally together full-time in 2007. Six years later, they competed in and won the fourth season of The Sing-Off on NBC, receiving the prize of $100,000 and a recording contract with Sony. A dedicated live touring act, Home Free often performs up to 200 shows a year. They have released six studio albums to date, including five that entered the top ten of the US Country Albums chart.