Classical crossover four-piece The Piano Guys have extended their Limitless Tour and, this fall, they're headed to Orpheum Theater – Omaha on Saturday 16th November 2019! The internet sensations, who are known for their genre-blending covers and mash-ups, will be performing from their album of the same name, as well as entertaining fans with plenty of surprises! Magnetic and accomplished performers, The Piano Guys obviously take joy in their craft, and their enthusiasm makes them a must-see live act! 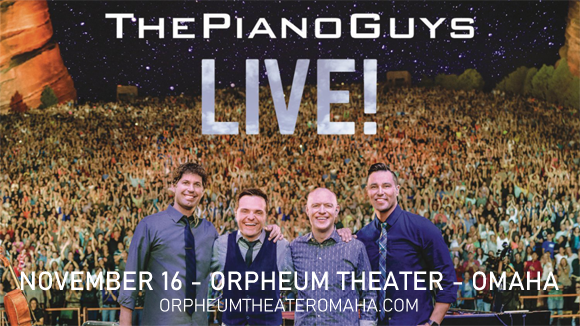 A YouTube success story, American musical group The Piano Guys began as a social media strategy to boost interest in videographer Paul Anderson's piano store of the same name. Anderson, pianist Jon Schmidt, cellist Steven Sharp Nelson and music producer Al van der Beek began recording and uploading professional-quality videos of piano and cello covers and compositions, combining elements of classical, contemporary and rock and roll music. The videos became hugely popular and as of August 2018 the group had surpassed 1.6 billion views on their YouTube channel, with 6.2 million subscribers. To date, the group has released eight studio albums, including a Christmas album, and their first six major-label albums all reached number one on the Billboard Classical Albums and New Age Albums charts. Their most recent album, Limitless, was released in 2018.