90s alt-rock icons Third Eye Blind are coming to Orpheum Theater – Omaha on Tuesday 26th November 2019 as part of their Fall 2019 Tour! They'll be playing from their brand new album, Screamer, which is their first in four years and contains the recent single of the same name, as well as performing various tracks from their three decade career! Third Eye Blind will be supported by special guest act Smallpools, who'll be performing some of their trademark indie tunes! 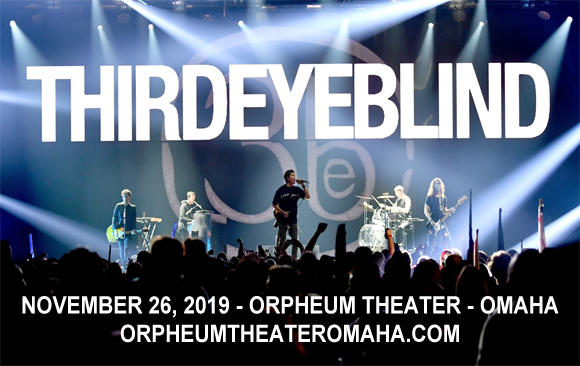 In May 1996, songwriting duo Stephan Jenkins and Kevin Cadogan signed what was later reported as the largest recording deal ever for an unsigned artist with Elektra Records. A singer and guitarist, respectively, Jenkins and Cadogan had begun making music together in San Francisco in 1993 and, after their record deal, became the band Third Eye Blind. Third Eye Blind became a huge success of the 1990s, with the songs "Semi-Charmed Life", "Jumper" and "How's It Going to Be" all reaching the Top 10 of the US Billboard Hot 100, and "Never Let You Go" reaching the Top 20. Their albums Third Eye Blind (1997) and Blue (1999) also went six times and single platinum in the United States, respectively. The band has undergone several line-up changes over the years, but continues to tour and record regularly. Third Eye Blind's sixth and most recent album, Screamer, was released in October 2019.