Wilco are headed to Orpheum Theater – Omaha on Wednesday 20th November 2019 as part of their first tour in two years! The alt-rock band, who celebrate their 25th anniversary this year, are promoting the release of their 11th studio album, Ode to Joy! The critically acclaimed album was released in October and topped the charts, proving that Jeff Tweedy and co are as on the pulse as they've ever been! Get your tickets now to get down to a full headline set of amazing Wilco tunes, including their newest singe, "Love Is Everywhere (Beware)"! 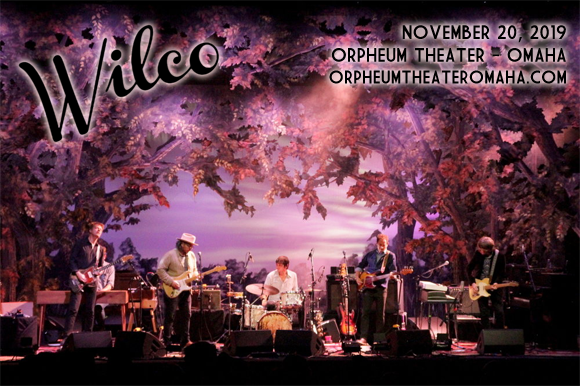 In 1994, singer Jay Farrar left the Chicago-based alternative country band Uncle Tupelo, paving the way for a new band – Wilco. To date, the band has experienced a number of line-up changes, and singer Jeff Tweedy and bassist John Stirratt are currently the band's only remaining original members. For the past 15 years, group's line-up has comprised Tweedy, Stirratt, guitarist Nels Cline, multi-instrumentalist Pat Sansone, keyboard player Mikael Jorgensen, and drummer Glenn Kotche. Wilco's debut came in 1995 with the release of their first album, A.M. Throughout its career, the band has released 11 studio albums, including the two-time Grammy Award-winning album A Ghost is Born (2004). Ode to Joy, the band's most recent album, was released in October 2019, and hit the top spot on the Billboard Folk Albums and Independent Albums charts, as well as number two on the Top Rock Albums Chart and number 21 on the Billboard 200.